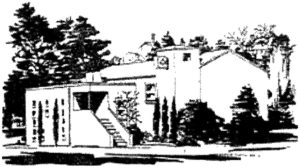 The year 1920 was promising.  World War I had given way to the feeling of well-being and peace of mind.  Men were returning from the war and getting on with their lives.  This time was also the start of a major growth boom for Freemasonry here in California.  New lodges were being formed throughout the East Bay region.

Fellowship Lodge received its charter on October 14, 1920 from Grand Master Charles Albert Adams.  Their first official meeting place was the Masonic Hall at 8th and Jackson Streets in Oakland, and their first Master was Worshipful John Maguri, a Unitarian minister.  Fellowship Lodge continued holding meetings in the Jackson Street hall until 1966.

Then, eight lodges in and around the East Bay area pooled their resources and were instrumental in financing and building a new Masonic Temple on Broadway Avenue just north of McArthur Blvd.  Modernly, this Masonic Temple is still home to two lodges and several other Masonic-related organizations.

Fellowship Lodge met at this new Masonic Temple for about 12 years, having invested some $25,000 in the new facility.  Today, Acalanes Fellowship Lodge still holds that original investment certificate.

Fortitude Lodge received their charter in 1925, and also met in the Masonic Hall at 8th and Jackson Streets.  As was a custom at that time, many lodges restricted their memberships to specific ethnic heritages, and Fortitude’s membership consisted entirely of brothers of the Jewish faith.

Acalanes Lodge first took root in 1952 when 12 members of Thousand Oaks Lodge #363 in Berkeley were attending a roll call meeting and discussed the possibility of starting a new lodge over the hill in Lafayette, as they lived in the Orinda, Lafayette and Walnut Creek area.  The lodge received a dispensation from Grand Lodge that year, and eventually received its charter on January 16, 1953 from Grand Master Arthur M. Warren in a ceremony held at the Acalanes High School gymnasium before a large crowd which commemorated the formation of three new lodges (also formed at that time were San Ramon Valley Lodge #724 and St. John’s Lodge #725, both of which have since that time consolidated with other lodges).

Acalanes Lodge first met in the old Veterans Memorial Building at the corner of Mt. Diablo Blvd. and First Street in Lafayette for approximately six years.  In 1959, they purchased the building (which we still continue to occupy today) at the corner of Brook Street and Moraga Road from the Lafayette Covenant Church for $50,000.  This price was later reduced to $48,000 because the building was not ready for another six months. Ultimately, Acalanes Lodge moved into this building in the summer of 1960.

The lodge struggled to raise the down payment necessary to obtain a mortgage for the building.  Despite the recession of the late 1950’s, the lodge eventually managed to obtain a mortgage from Bank of America.  In 1976, Harold E. Pauli, the first Master of Acalanes Lodge) passed away, and his widow presented a check to the lodge in the amount of $14,000.  This generous donation enabled the lodge to pay off the mortgage, and a mortgage-burning ceremony was conducted in the lodge room in May 1977, presided over by Grand Master Kermit Jacobson and his Grand Lodge officers.

Fellowship Lodge moved from Oakland to Lafayette in 1977, and held their first meeting in the building owned by Acalanes Lodge.  After renting the facility for a year, both lodges entered into discussions and subsequently agreed to consolidate.  Thus, on December 4, 1978, Acalanes Fellowship Lodge #480 was officially formed.  The new consolidated lodge kept both lodge names, and after some initial resistance, adopted the lower number so that the history and recognition of all the past masters of the three lodges would be retained.

Today, Acalanes Fellowship Lodge maintains an enthusiastic membership and remains a successful lodge in Central Contra Costa County.  Two of the lodge’s Past Masters, Most Worshipful E. Arthur Haglund and Most Worshipful Alvin Weis, have each served as Grand Master of the Grand Lodge of California, in 1984 and 1999 respectively.  Several other lodge members have served as officers of the Grand Lodge over the years, including Very Worshipful Allan Casalou (Past Master), the current Grand Secretary, and Worshipful Gary Charland (also Past Master), who currently serves as President and CEO of the Masonic Homes of California.

— A special thanks to Most Worshipful Alvin Weis, Past Grand Master, for providing us with much of the history of the Lodge and content for this page. We are grateful for your contribution.